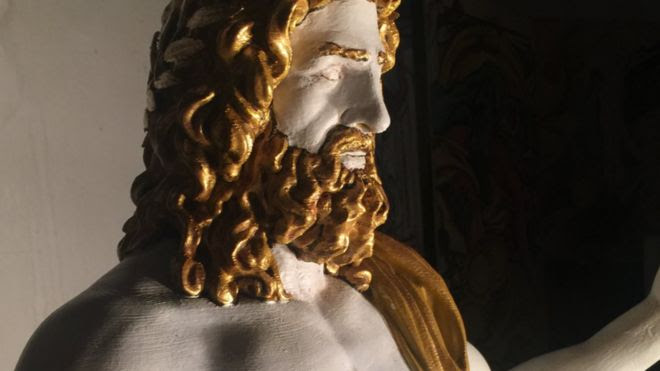 The original statue was made of wood, ivory and gold but the recreation is entirely thermoplastics


An ancient Greek statue of Zeus has been recreated using 3D printing, after it was lost in the 5th Century.
One of the seven wonders of the ancient world, the statue of Zeus at Olympia was recorded only in descriptions and illustrations on coins.
3D printing firms Stratasys and 3DPTree made the recreation for the Millennium Gate Museum in the US city of Atlanta.
One expert in classical sculpture said 3D printing was a "powerful tool" for learning about lost artefacts.
The Greek statue was roughly 13m tall but the 3D-printed version stands at a more modest 1.8m.
Read the rest of this article...
Posted by David Beard MA, FSA, FSA Scot at 6:15 pm 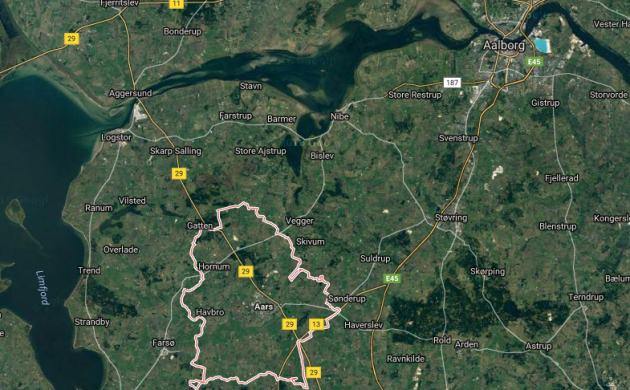 The mysterious site was found near Aars west of the Limfjord in northeastern Jutland (photo: Google Maps)


Danish archaeologists have discovered a mysterious New Stone Age construction near the town of Aars in northeastern Jutland.
“I never use the word sensation, but I must admit this is as close as it gets,” Bjarne Nielsen, the leader of the research team and curator at Vesthimmerlands Museum, told newspaper Nordjyske Stiftstidende.
“We have not seen anything like it before.”
Read the rest of this article...
Posted by David Beard MA, FSA, FSA Scot at 6:11 pm

Delighted volunteers at a South Shields culture spot had a blast from the past after unearthing a Roman goddess.

Volunteers from the WallQuest community archaeology project and the Earthwatch Institute made the startling discovery at Arbeia Roman Fort.

The dramatic discovery is a beautifully crafted miniature bronze figure of the Roman goddess Ceres which is thought to be a mount from a larger piece of furniture.

Ceres was the goddess of agriculture, grain and fertility which is a highly appropriate goddess for Arbeia because it was a supply base where thousands of tons of grain were stored in granaries to feed the army stationed along Hadrian’s Wall.


The ancient Roman kitchens of a Pompeii launderette have once again been kitted out with pots and pans as part of a new project that is trying to give visitors a sense of what day-to-day life in the city was like. 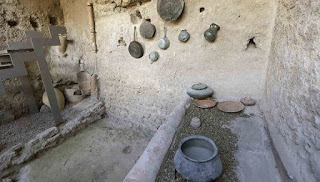 The kitchens at the Fullonica di Stephanus
[Credit: Archaeological Superintendency of Pompeii]

Before they were buried by a volcanic eruption in AD 79, the kitchens once provided food for the hungry attendants of the three-storey launderette, the Fullonica di Stephanus.

The Fullonica was the place where wealthy Roman patricians sent their togas to be washed in huge baths using clay and urine. The garments were then rinsed, dried and placed on special presses to ensure they returned to their noble owners crease-free.

Thanks to a refurbishment which finished on Monday, the kitchens inside the Fullonica now appear as they did 2,000 years ago, complete with metal grills, pots, pans and earthenware crockery.

Luxury at Tintagel in the Early Medieval Period 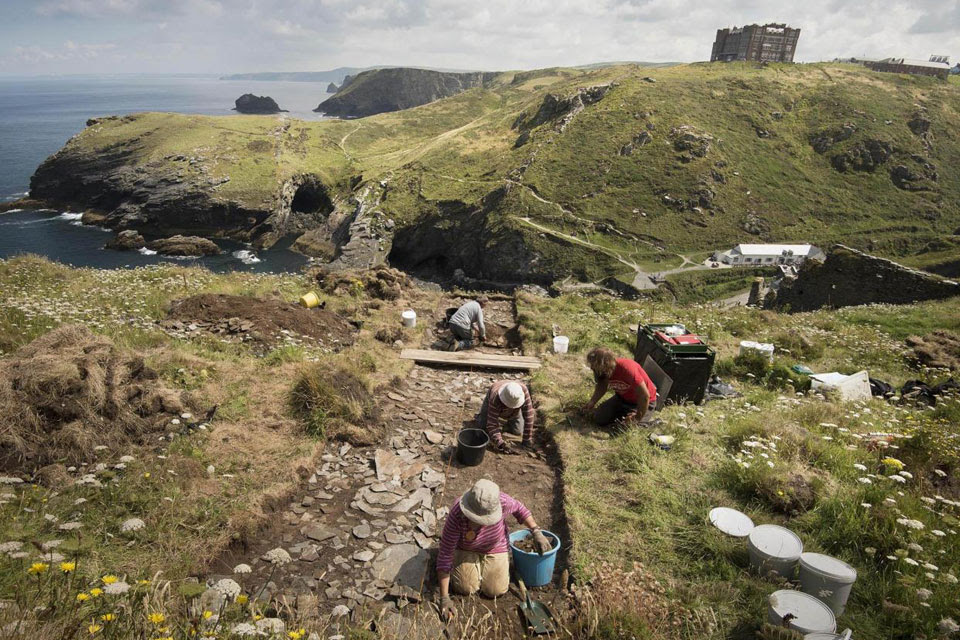 This summer archaeologists have been excavating in Cornwall at Tintagel, the famous site for Arthurian Legend. The results are exhilarating.

English Heritage, which runs Tintagel, recently commissionedCornwall Archaeological Unit to carry out onsite excavations at Tintagel, the famous seat of the legendary King Arthur.
The first phase of excavations, which took place in July, included digging trenches in two previously unexcavated terrace areas of the island settlement. It was hoped research into these carefully chosen areas would reveal more about how the people of Tintagel lived in the Post-Roman period from 5th to 6th centuries AD.


The month of July 2016 saw the traditional archaeological season in Bulgaria in full swing, with finds at digs in various parts of the country – from an 8000-year-old settlement in Sofia to the rock tomb of a Thracian princess near Benkovski to the long-awaited unearthing of the eastern gate of Perperikon – producing headlines. 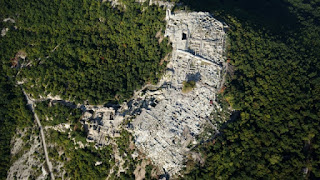 
At the beginning of July, it was announced that a team of Bulgarian archaeologists had uncovered the remains of an early Neolithic settlement, dating back 8000 years, in the Slatina neighbourhood of Bulgaria’s capital city Sofia.It has long been known by archaeologists that the oldest human settlement in Sofia was in Slatina.In recent days, archaeologists had come across the remains of two burnt houses, of an impressive size for the age. The head of research, Professor Vassil Nikolov, said that the structures were 150 square metres, with three rooms and two additional business premises.
Read the rest of this article...
Posted by David Beard MA, FSA, FSA Scot at 6:00 pm Recently a very large Merovingian cemetery was discovered. With more than 600 graves the medieval archaeologists from INRAP are excited.

This summer, as part of the construction of a school in the village of Monchy-Lagache east of Amiens in Somme, an archaeological evaluation has – as is required by French law – been carried out . Huge was the amazement, when the archaeologists found a unique cemetery.

McKenna McFadden, an Irish American film and television major at New York University, is in Dublin for the summer with an NYU program. She was walking on the shore of Oney Island in Connemara in the west of Ireland this week when something sitting in the sand caught her eye.

Little did she think it would be a rare artifact from the 12th century.

The NYU Dublin group was being led on a tour of the island by the Connemara-based archaeologist Michael Gibbons.

As McFadden told IrishCentral, “I had been looking at some rabbit burrows with my friend while on a tour of the island lead by archaeologist Michael Gibbons. When stepping back from the burrows, I looked down and saw the back of the brooch and picked it up.


A beautifully crafted miniature bronze figure of the Roman goddess Ceres was found by volunteers from the WallQuest community archaeology project and the Earthwatch Institute at Arbeia Roman Fort, South Shields. 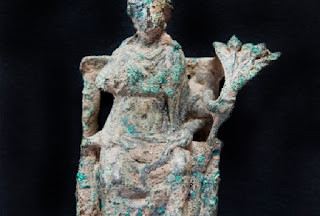 The artifact thought to be a mount from a larger piece of furniture. Ceres was the goddess of agriculture, grain and fertility which is a highly appropriate goddess for Arbeia because it was a supply base where thousands of tons of grain were stored in granaries to feed the army stationed along Hadrian’s Wall.

This is the second goddess that the WallQuest project has found at Arbeia in two years. In 2014, a local volunteer found a carved stone head of a protective goddess, ortutela. 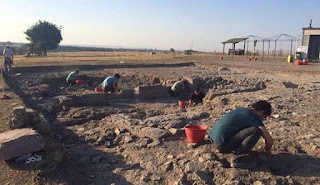 A team of Duke scholars and students spent this summer at two historic sites in Italy and made significant discoveries. The team, based in part in the dig@lab, a digital laboratory run by Maurizio Forte, a professor of classical studies and art, art history and visual studies, discovered two Roman Empire-era facilities, a public building and an amphitheater. 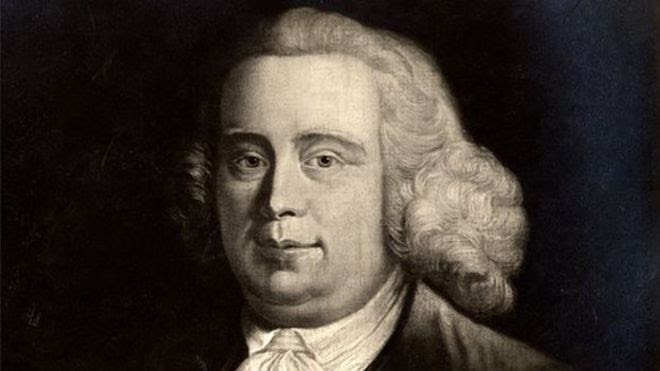 A new exhibition marking 300 years since the birth of canal pioneer James Brindley has opened. How did his work transform the English landscape and unlock a new era in the Industrial Revolution?
When James Brindley sought Parliament's backing for his plan for an aqueduct over the River Irwell in Lancashire, he apparently employed a novel means of gaining their attention.
Taking out a block of Cheshire cheese, the man who engineered England's first canal carved out a model of the waterway he hoped to build. 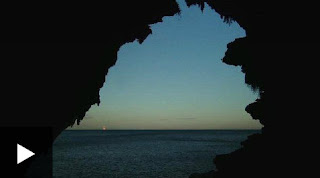 The cave systems at the base of the rock of Gibraltar have just received Unesco world heritage status, in recognition of the rich insights they bring to the study of Neanderthals.
They reveal that modern humans share a little more than you might expect with the extinct species, as Melissa Hogenboom explains.
Video courtesy of BBC Earth.