“These are the runes we’ve been missing,” says archaeologist.

A comb with a runic inscription of the word “comb,” perhaps doesn’t sound so sensational. But it is.

The comb dates to the early Viking Age around 800 CE. Just a handful of runic texts from this period exists.

The comb was discovered during excavations of a Viking Age market place in Denmark’s oldest town Ribe.

Alongside the comb, archaeologists also discovered a runic inscription on a small plate of bone or antler.

“These are the runes we’ve been missing. We’ve waited generations to be able to dig into this,” says Sindbæk.

Ancient human remains found in Mayo date back over 5,000 years 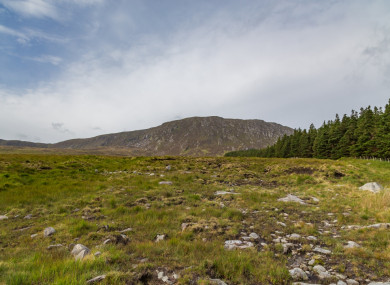 
THE DEPARTMENT OF CULTURE, Heritage and the Gaeltacht has revealed that ancient human remains, which were discovered by a local hillwalker on a Mayo mountainside in 2016, date back as early as 3,600 BC.
The research found that the natural boulder chamber in which the remains were found was used for human burial practice through the Neolithic period.
A least 10 individuals – adults, teenagers and children – were placed in the chamber over a period of up to 1,200 years, according to the research. One of the adult bones dated to 3,600 BC, while a bone of a child skeleton dated to 2,400 BC.
In August 2016, local hillwalker Michael Chambers discovered a cave-like chamber among some large boulders on Ben Gorm Mountain in Newport, Mayo.
He found human bones scattered over the rock floor of the chamber and contacted gardaí in order to have them tested.
Read the rest of this article...
Posted by David Beard MA, FSA, FSA Scot at 12:21 pm 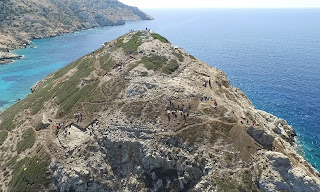 New work at the settlement of Dhaskalio, the site adjoining the prehistoric sanctuary on the Cycladic island of Keros, has shown this to be a more imposing and densely occupied series of structures than had previously been realised, and one of the most impressive sites of the Aegean during the Early Bronze Age (3rd millennium BC).

Until recently, the island of Keros, located in the Cyclades, south of Naxos, was known for ritual activities dating from 4,500 years ago involving broken marble figurines. Now new excavations are showing that the promontory of Dhaskalio (now a tiny islet because of sea level rise), at the west end of the island next to the sanctuary, was almost entirely covered by remarkable monumental constructions built using stone brought painstakingly from Naxos, some 10km distant.

Bronze Age Arrows and a Viking Sword – The 2017 Fieldwork Was Awesome!

The Storfonne ice patch, photographed in September 2014 during a major melt. Notice the light grey lichen-free zone surrounding the ice. This area was exposed by ice melt in the last 15-20 years. Photo: Lars Pilø, Secrets of the Ice/Oppland County Council.

Both sites had only seen short visits prior to this field-season. This had resulted in a number of artifact recoveries, especially arrows, found close to the melting ice. However, we knew that there were other finds on these sites, and that they were lying on the surface, exposed to the elements. The main job would be to rescue these artefacts. To achieve this, we planned to conduct a systematic and thorough survey of the lichen-free zone (where the ice has melted recently) surrounding the ice on both sites.

The Lauvhøe ice patch was up first. The earliest finds from this site were reported in 2007: three arrows, dating to the Iron Age and the medieval period. Even with these remarkable finds, the site had to wait ten years for a proper systematic survey. This may sound harsh, but with the short time window available for surveys each year, other sites with more and older finds had to be surveyed first. Lauvhøe’s turn had finally come this year. 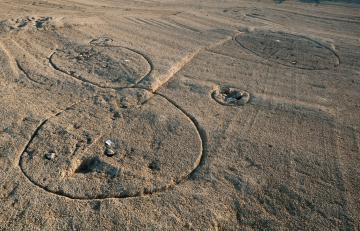 An 18-year-old girl who lived in Greece 7,000 years ago and was unearthed by archaeologists in Theopetra cave, near the city of Trikala, has had her face reconstructed and is about to officially introduce herself to the public.

Eight years after the revelation of Myrtis, the reconstructed head of a girl that once lived in Classical-era ancient Athens and died during the plague in Athens in the 5th century BC and following the international sensation that it caused, the Acropolis museum is ready to to introduce Dawn’s new face from an even earlier past, to Greek and international audiences.

Dawn (Avgi in Greek) is a woman from the Mesolithic era (7,000 BC) who lived in the Theopetra cave, according to Athens University professor Manolis Papagrigorakis; who has invested a great deal of time and learning in order to bring Greeks “face to face” with their ancestors.

ARCHAEOLOGISTS are probing an ancient mystery uncovered by workers deep in a Highland forest.

The crumbling ruins are believed to have been an Iron Age fort, or possibly the home of a local chief or lord, and date back to about 2,400 years ago.

The site was known about from a survey taken in the 1940s, but had been forgotten about until it was spotted by loggers clearing the land.

Now researchers are unravelling its tantalising mystery, with evidence showing the structure may have a violent past and was burnt down twice and rebuilt before finally being abandoned. 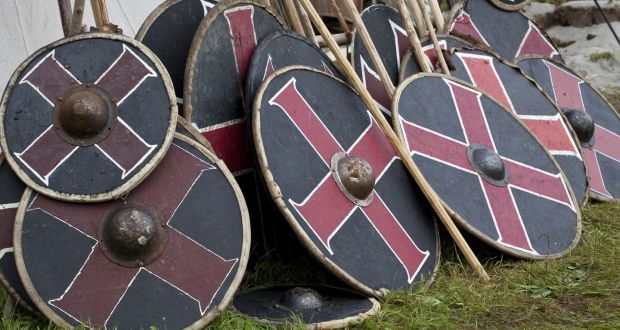 Cork was a significant centre for Vikings in Ireland with an urban centre that predates the Viking settlement in Waterford, a new report on the excavation of the city’s event centre has revealed.

According to the report by Cork City Council executive archaeologist, Joanne Hughes, the latest discoveries at the South Main Street site confirm Cork’s significance in the Hiberno-Norse world.

In the report presented to members of Cork City Council, Ms Hughes said that excavation of the site by archaeologist Dr Maurice Hurley for developers BAM, was highly revealing about Cork’s past.

She explained that the site of the former Beamish and Crawford Brewery adjacent to the south channel of the Lee had been divided into three separate sections for excavation purposes.