Anote, from father to son in 14th century Russia was etched into the bark of a birch tree and curled into a scroll. The scroll and a dozen others like it were among the finds from this year’s digging season.

These scrolls will be added to a collection of more than 1,000 birch-bark documents uncovered in the Russian city of Novgorod, after being preserved for hundreds of years in the mud.
“Send me a shirt, towel, trousers, reins, and, for my sister, send fabric,” the father, whose name was Onus, wrote to his son, Danilo, the block letters of Old Novgorod language, a precursor to Russian, neatly carved into the wood with a stylus. Onus ended with a bit of humour. “If I am alive,” he wrote, “I will pay for it.”
Read the rest of this article...
Posted by David Beard MA, FSA, FSA Scot at 6:56 pm

Archaeologists have discovered a sunken village from millennia ago

The first Stone Age settlement identified in Polish waters has been discovered in the lake Gil Wielki, Iława Lake District (Warmia and Mazury) by underwater archaeologists led by Dr. Andrzej Pydyn from the Department of Underwater Archaeology, Institute of Archaeology, Nicolaus Copernicus University in Toruń.
The discovery was made in the project carried out in cooperation with the Warsaw branch of the Scientific Association of Polish Archaeologists.

"In shallow water in the reservoir we found a large amount of animal bones, remains of tools made of antler and numerous fragments of pottery, used at various times by ancient communities. Among them, the fragments that caught our attention relate to the tradition of late Neolithic, probably associated with the so-called Corded Ware culture" - told PAP Dr. Andrzej Pydyn.

Roman gladiators ate a mostly vegetarian diet and drank ashes after training as a tonic. These are the findings of anthropological investigations carried out on bones of warriors found during excavations in the ancient city of Ephesos.

Historic sources report that gladiators had their own diet. This comprised beans and grains. Contemporary reports referred to them as "hordearii" ("barley eaters").
In a study by the Department of Forensic Medicine at the MedUni Vienna in cooperation with the Department of Anthropology at the Institute of Forensic Medicine at the University of Bern, bones were examined from a gladiator cemetery uncovered in 1993 which dates back to the 2nd or 3rd century BC in the then Roman city of Ephesos (now in modern-day Turkey). At the time, Ephesos was the capital of the Roman province of Asia and had over 200,000 inhabitants.
Read the rest of this article...
Posted by David Beard MA, FSA, FSA Scot at 6:51 pm


The decoding of the Phaistos Disk has puzzled specialists for over a century, however new findings describe the disk as “the first Minoan CD-ROM’ featuring a prayer to a mother. Gareth Owens, Erasmus coordinator at the Technological Educational Institute (TEI) of Crete, speaking at the TEI of Western Macedonia on Monday, said the disk is dedicated to a “mother”. 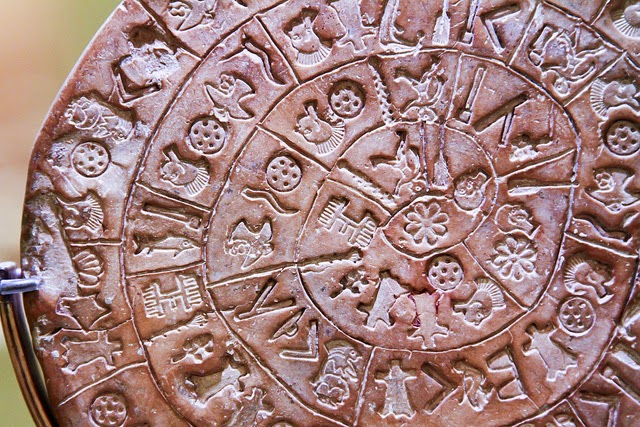 Discovered in 1907 in the Minoan palace of Phaistos in Crete, the disk has been the  subject of many an interpretation attempt. However, the small total body of text - it consists  of only 241 signs on both sides, based on 45 individual signs - defies any  decisive conclusion [Credit: Yves Brise/Flickr]

“The most stable word and value is ‘mother’, and in particular the mother goddess of the Minoan era,” said Dr. Owens. He says there is one complex of signs found in three parts of one side of the disk spelling I-QE-KU-RJA, with I-QE meaning “great lady of importance” while a key word appears to be AKKA, or “pregnant mother,” according to the researcher. One side is devoted to a pregnant woman and the other to a woman giving birth.


A skeleton with a stake driven through its chest has been unearthed in Bulgaria, in what archaeologists are terming a "vampire grave"

The skelton with an iron spike through the chest, which was supposed to stop the dead rising

A "vampire grave" containing a skeleton with a stake driven through its chest has been unearthed by a man known as "Bulgaria’s Indiana Jones".
Professor Nikolai Ovcharov – a crusading archaeologist who has dedicated his life to unearthing mysteries of ancient civilisations – said that he had made the discovery while excavating the ruins of Perperikon, an ancient Thracian city located in southern Bulgaria, close to the border with Greece.
The city, inhabited since 5,000 BC but only discovered 20 years ago, is believed to be the site of the Temple of Dionysius – the Greek God of wine and fertility. And among the finds at the site, which includes a hilltop citadel, a fortress and a sanctuary, are a series of "vampire graves".
Read the rest of this article...
Posted by David Beard MA, FSA, FSA Scot at 8:05 pm


A Greek and international team of divers and archaeologists has retrieved stunning new finds from an ancient Greek ship that sank more than 2,000 years ago off the remote island of Antikythera. The rescued antiquities include tableware, ship components, and a giant bronze spear that would have belonged to a life-sized warrior statue. 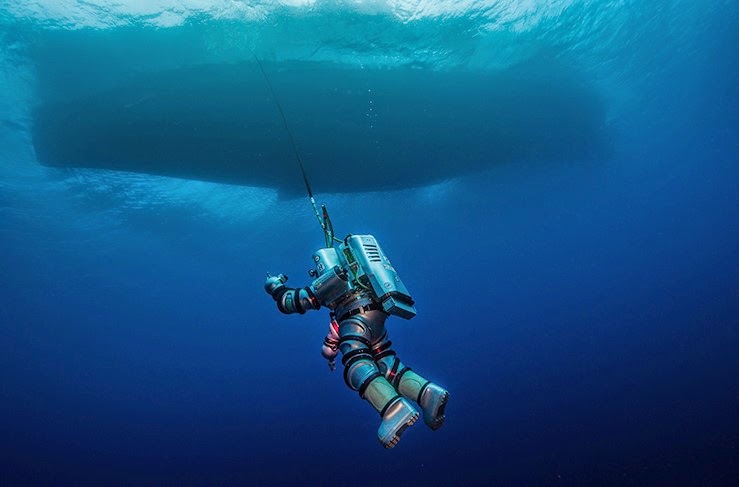 The Antikythera wreck was first discovered in 1900 by sponge divers who were blown off course by a storm. They subsequently recovered a spectacular haul of ancient treasure including bronze and marble statues, jewellery, furniture, luxury glassware, and the surprisingly complex Antikythera Mechanism. But they were forced to end their mission at the 55-meter-deep site after one diver died of the bends and two were paralyzed. Ever since, archaeologists have wondered if more treasure remains buried beneath the sea bed.

The fatal attraction of lead 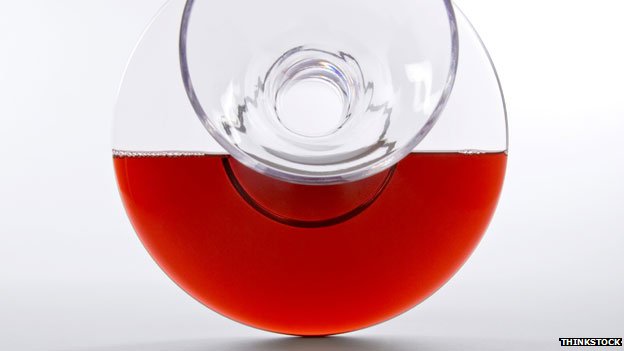 For millennia lead has held a deep attraction for painters, builders, chemists and winemakers - but it's done untold harm, especially to children. And while it's no longer found in petrol, you've still got several kilograms of it in your car.
Element number 82 is one of a handful that mankind has known for millennia. The oldest pure lead, found in Turkey, was made by early smelters more than 8,000 years ago.
That's because lead is very simple to produce. It often comes mixed up with other more coveted minerals, notably silver. And once the ore is out of the ground, thanks to its low melting point, the lead can easily be separated out in an open fire.
Read the rest of this article...
Posted by David Beard MA, FSA, FSA Scot at 7:54 pm 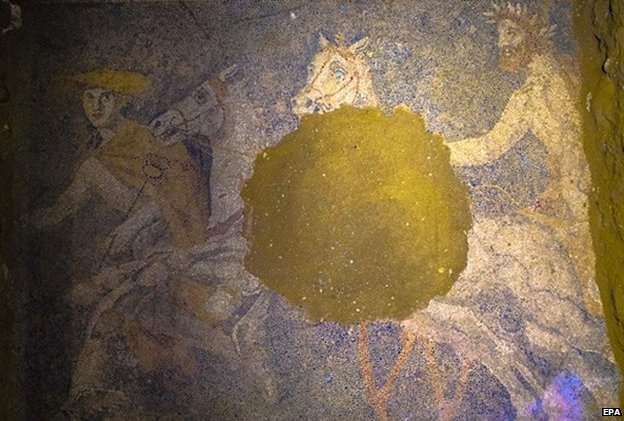 
Archaeologists unearthing a huge ancient burial site at Amphipolis in northern Greece have uncovered a large floor mosaic.
The mosaic - 3m (10ft) wide and 4.5m (15ft) long - depicts a man with a laurel wreath driving a chariot drawn by horses and led by the god Hermes.
The burial site is said to be the largest ever found in Greece.
It dates from the late 4th Century BC, spurring speculation that it is linked to Alexander the Great of Macedon.
Read the rest of this article...
Posted by David Beard MA, FSA, FSA Scot at 7:52 pm

A metal detector enthusiast blessed with “a magic touch” has discovered one of the most significant Viking hoards of the past century in southwest Scotland, his third outstanding find in less than a year.
Derek McLennan, 47, from Hollybush, Ayrshire, said he was stunned by his latest success, despite a track record which has seen him unearth hundreds of medieval coins at two separate sites.
This time, working in a pasture owned by the Church of Scotland, he pulled out an arm ring with a distinctive Viking pattern.
That initial find at a site in Dumfries and Galloway was made last month. In the hours and days that followed, Mr McLennan and the county archaeologist unearthed more than 100 objects, including a silver Christian cross inlaid in gold, probably from Dublin, and a large Carolingian pot complete with its lid, one of only three of its kind known in Britain.


Archaeologists have discovered one of the largest hauls of Neolithic pottery in the south west on St Martin's in the Isles of Scilly. 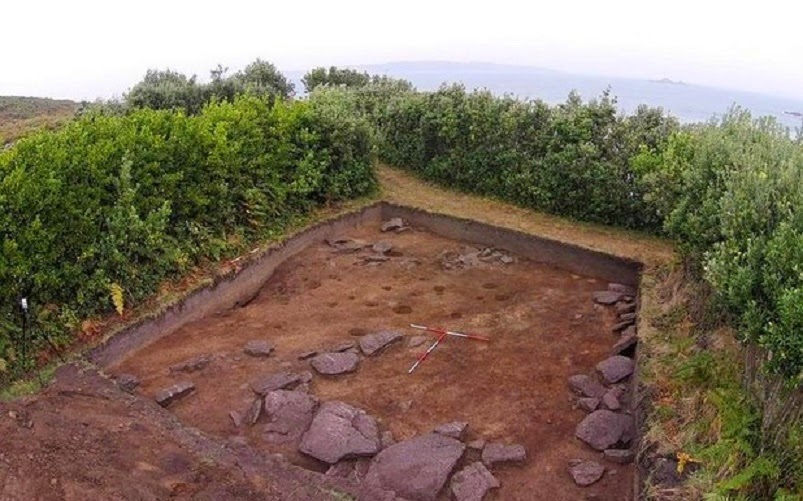 The Old Quay site on the edge of the sea at St Martin's  [Credit: The Cornishman]

Thousands of pottery shards, dating back between 3,500 and 3,000 BC, have been uncovered thanks to a project run by volunteers.

Dr Garrow called the find of an age that preceded the Bronze Age "significant and intriguing ". The new site taps “advanced hardware acceleration and WebGL,” which basically helps bring powerful 3D capabilities to the browser.
From Microsoft’s perspective, this move represents part of its Rethink campaign, as it looks to convince the world that Internet Explorer is still worth your time.
Interestingly, Nokia is also teaming up with CyArk, lending its HERE True mapping vehicles to help create detailed models of roads and cities using LiDAR. You can see a short skit here of HERE’s work with CyArk in Philadelphia.
Read the rest of this article...
Posted by David Beard MA, FSA, FSA Scot at 4:07 pm